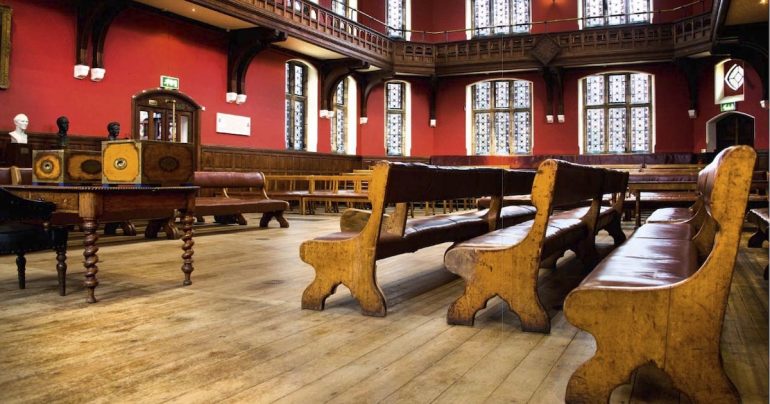 This year the Oxford Union will celebrate its 200th year. With such a significant birthday, all year, many will be reflecting on its history, its controversies, and its future. So, while I figure out what shape my column will take, here is my little tribute.

It is often said that the first step to beating an addiction is to admit it, so here it goes. *Deep breath in* I am a YouTube addict. There you go. I’ve said it. It’s an addiction that has taken over my life for many years. Craftily listening to videos with an AirPod on the opposite side so the person sitting next to me couldn’t see. Even while composing this column, my brain was forced to enter deadline mode, with my fingers frantically pirouetting the keyboard because I was too busy snorting content. Yet, I still remember my first fix.

It was sometime in 2014, a video clip of John Mayer talking about his friendship with Steve Jobs at the Oxford Union. Those nine minutes left me, an Ætheling music producer, inspired to keep pushing for higher creative standards. Finally, I was allowed to peer over a fence I didn’t know existed. I saw the other side of the coin. I was hooked.

Speaker after speaker, debate after debate. I was learning how to think, form arguments, and have informed discussions. The phone notifications of every upload became my drug dealer. Constantly telling myself, ‘Just one more video before I crack on with work’. Whether it was watching the Grammy award-winning producer Andrew Scheps, fix my anxieties of mixing records with his “What comes out of the speakers” lecture. Or with Ricky Gervais, on writing and using non-verbal dialogue as a tool in The Office. And one of the most inspiring addresses, and my favourite, was from the iconic chef Marco Pierre White in 2016. The way he tells the story of his career, even though I’m in a different industry, resonated with mine. A northern boy from a council estate, who had a parent die at a young age, left home at sixteen and worked his arse off. My obsession with audio almost matches his obsession with food. The constant striving for higher standards.

At this point, it was hard to recognise I may have had a problem because these weren’t pointless MoJo Top10 videos. Instead, I was absorbing content fit for a student of the greatest and oldest university on the planet. Still, I know I have a hyper-addictive personality and have previously suffered from various substance abuse. So when the ratio between consuming and being productive was beginning to skew in the wrong direction. I knew things were bad.

According to the Union’s Rules and Standing Orders, it must “promote access to competitive debating, particularly among groups that have historically underrepresented”. So, although the chances of me ever getting there were slim then, I felt I had a seat in the room. I felt part of it. That is what allowed me to have the leap of imagination to want to study for a master’s degree at the University of Oxford.

However, this was not the case for most of the Union’s history. For example, in 1985, Christopher Hitchens wrote for the Literary Review, “it is the essence of the Union that most people can not be members of it”. But this was before the internet. Where only those who could afford a membership and the time to queue early on event nights could share in the battle of ideas. Platforms like YouTube have changed that. They removed the cost of promoting free speech beyond a small, privileged collective. So now the battle of ideas has no borders.

This is how the Union impacted this chavvy little careleaver and guided me to this hallowed institution. I’m pretty sure the Oxford Union generates a fair bit of revenue from uploading content to YouTube. However, it should be aware of its civic duty to keep uploading regardless. Because it allows people from my background to not only learn, but to dream the impossible. Yes, the Oxford Union is independent of the University. Still, it is the fence for people to get a peep inside. I am working through this addiction like I have many others in the past. Perhaps I could swap it to my reading list? But I may relapse with the list of speakers planned for their bicentenary year. Maybe I’m just cursed with an addict’s optimism?