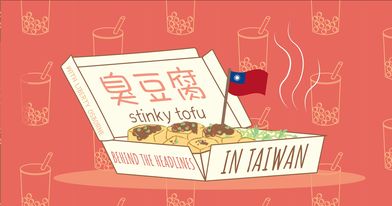 When introducing Taiwan to a stranger, there is no better place to start than the food. From steaming hotpot “火鍋”, to fluffy bao buns “包子”，to the globally renowned bubble tea; at its heart, Taiwan is a culinary island. As an avid binge watcher of Anthony Bourdain documentaries, this was one of the few things I had heard before coming here for my year abroad, and I wasn’t disappointed.

Almost all social gatherings centre around some sort of meal or snack; in the same way you might meet up with friends at home to go the pub, in Taiwan you would meet up to go to a “quick fry” 熱炒 place, or grab hotpot. Even when there is no social occasion at hand, eating out is cheap, and Taipei’s pavements are packed with places selling heaped bowls of soup noodles for the equivalent of a couple of quid.

(It is worth noting that, in stark contrast, ingredients in supermarkets can be shockingly expensive, so many Taiwanese never cook, and lots of flats don’t even have a kitchen. This is all the more true for Western dishes, meaning that my first-year staple of pasta with tomato sauce now costs an arm and leg and is reserved for homesickness-remedying moments only.)

The ultimate manifestation of Taiwan’s culinary culture comes in the form of the night market,  foodie paradises which come alive in the evenings. Many of them feel like miniature cities in themselves, and it is easy to get lost in the labyrinth of lane upon lane of stands dedicated to selling knock-off clothes, arcade games, and, most importantly, food. Some of these stands have even earned places in the Michelin guide, often with multiple generations of a family working for years to perfect a single dish.

Think of walking into a night market as like hurtling down the culinary rabbit hole into a world filled with hundreds of stalls adorned in multicoloured lights, the stench of stinky tofu, and the constant blaring of aggressive salesmanship.

Once you have entered a night-market, you will inevitably feast like a king. Picture teriyaki-barbecued mushrooms dusted with lemon salt, followed by poached eggs stuffed into a cheesy, deep-fried scallion pancake “蔥油餅”, all washed down with lavishings of creamy papaya milk. If that doesn’t quite tickle your fancy, then maybe try freshly grilled squid on a skewer, with Thai-style chocolate banana crepes or Aboriginal millet mochi for dessert, topped off with tea made from real passion fruits.

I often get asked why I study Chinese, and, after 5 months exploring Taiwanese night markets, I have come to the conclusion that the best answer is simply for the food. I am also now well aware that not all night markets are created equal, with my favourite located outside of Taipei in the city of Tainan.

Tainan lies towards the southern tip of Taiwan, and, as the oldest city on the island, is scattered with historical buildings and beautiful temples. It was originally established as a trading port by the Dutch East India Company, but then went on to serve as the capital of Taiwan under successive rulers, including the fleeing Ming general Koxinga, the Qing Empire, and the beginning of Japanese colonial rule. The city is famed for its sites that reflect this history of conquest and renewal, with the intermingling of Dutch, Japanese, and Chinese influences reminding any visitor just how various and volatile the last two hundred years or so of Taiwanese history have been.

When my language partners suggested a trip to Tainan in early January, I was therefore very excited. They are part of an exchange program which Oxford organised in a much-needed effort to boost our language skills, assigning each of us Taiwanese ‘buddies’. I lucked out, with my exchanges, and their various friends who I have met so far, all being absolutely lovely and keen to show me around. This culminated in our venture south, which proved to be a great way to not only eat a lot of food, but also discover Taiwanese culture from the perspective of our ‘buddies’.

In the very first temple we visited they showed us how lovelorn young people often worship at a particular shrine with the hope of meeting their soulmate. For me, writing down your personal criteria for your dream boyfriend on a heart-shaped sticky note, then hanging it up next to hundreds of others, seems like a very odd thing to do, let alone in a centuries-old temple, but, to them, it was perfectly normal.

Conversely, when one evening I mentioned that I might be showering in the morning, I was greeted with an expression of total shock. ‘真的嗎?’ ‘Really?’ one of my exchanges asked, saying that she had seen it in American movies before, but didn’t realise that some people actually shower in the morning. I, on the other hand, had no idea that my morning showering habits were such a Western novelty.

As a first column, this has been rather higgledy-piggledy. But, if you happen to be reading this as a lovelorn foodie who likes to shower in the evening and has a niche interest in the activities of the Dutch East India Company, at least you now know that Taiwan is the place for you.