Last year, Oxford completed their first clean sweep of the Varsity cricket matches. Ruthless in the Twenty20; controlling at Lords; unrelenting throughout the 4-days at The Parks; this was a unique dominance – hallmarked by adaptability. And yet, remarkably, this year feels more unpredictable than ever.

It is not the first time that the feat has been achieved. In 2011, Cambridge triumphed across all three formats. Indeed, they overpowered the dark Blues. But this was a Cambridge outfit bolstered by the arrival of the raw talents of Paul Best and Zafar Ansari, adding unrivalled skill to a side already boasting eight returning Blues. Last year, there was no obvious chasm between the sides. No defeat was crushing. The 4-day fixture was won in the dying embers; the 142nd over of a gruelling, resilient rear-guard. This was a Varsity like no other, a performance like no other.

Since the inauguration of a twenty20 contest in 2008, the three fixtures have typically been played in all encompassing, intensive three-week period. The result has been a shift in focus. Versatility is now at a premium. Both sides have flirted with the winning formula, but in its short history, neither can lay claim to have patented it.

Cambridge won 4 of the first 5 Lords matches played on the back of the new-fangled twenty20 fixture, but their dominance was not reflected elsewhere. Incredibly, Oxford responded in kind, and now chase the chalice of a 5th consecutive 50 over victory. There have been triumphs, yes. Dynasties? No. Since 2008, no team has retained either the 4-day or twenty20 crowns. Both stand at 3 victories apiece. Now in its 10th year, the introduction of the shortest format to the series has created the ultimate test for Blues cricket.

For Oxford then, this season represents an unprecedented opportunity for confirmation. There have been whitewashes at home, but never away. A double treble would be unheard of; yet it is a very real possibility.

By a quirk of the league structure, Oxford (Southern Division A) and Cambridge (Midlands Division 4A) compete in separate BUCS divisions throughout the early parts of the season. While Oxford ply their trade nearer to the French shores than to East Anglia, the light blues are pitted against Nottingham, and Leicester, further North. Comparison between the two sides is achieved only through dilute form lines, and rooted in tradition, mid-term examination breaks further cloud the picture. A Varsity campaign is a strange beast, and the end of season trio of contests are undoubtedly the defining arbiter for success.

As the Cambridge fixtures appear on the horizon, Oxford’s form in the competition has exploded. After losing their first two matches, southern comforts against Bournemouth and Portsmouth, either side of an emphatic defeat of Cardiff at The Parks, have fired ambitions for the weeks to come.

In very recent times, at Fenners, Cambridge have been notoriously good, and they will no doubt be chasing victory again. Since 1998, Cambridge have only been victorious on three occasions in the 4-day fixture (Oxford have triumphed eight times in the same period). All three have been at Fenners, and all three have come in Oxford’s past four visits to the other place (2009, 2011, 2015). This season the side are again unbeaten at Fenners. 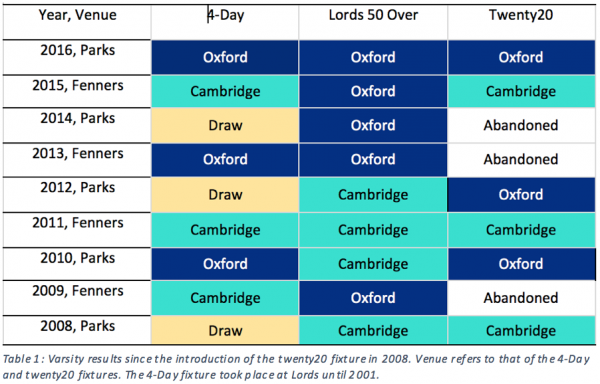 The anomaly is Oxford’s visit in 2013, when the dark Blues triumphed against type. Typically, it has taken an astounding piece of individualism to leave Fenners with something. This time, Sam Agarwal hit the first ever triple century in the University Match – a staggering 313*(312). It was Oxford’s first away success since 2005, when, that time, Salil Oberoi had plundered the previous high score, a masterful 247. In fact, in Varsity history, three of the highest four individual scores have been hit by Oxford batsmen playing in away fixtures at Fenners. All three have been in the first innings; all three have set up innings defeats; and all three have been since the turn of the millennium. The third? A 236* hit by future England international Jamie Dalrymple in 2003. Fenners is a venue entrenched in rich history.

A man who witnessed Sam Agarwal’s innings live himself, and knows what it takes to win at Fenners, is Johnny Marsden. Twice (in 2013 and 2016) he has taken the clinching wicket in the 4-day fixture, but Marsden has tasted defeat, too. A 4-time Blue, and one of the lowly 5 returning Blues from Oxford’s triumph, Marsden will be a key man across the three formats. He has taken 19 wickets at a miserly 18.79 apiece vs Cambridge in the longest format, and at 16.14 with an economy of 3.90 at Lords, but crucially, only 5 of those (at 32.6) have come at Fenners, where this year he will spearhead the Oxford pace battery.

Another of the returning Blues around which this new-look Oxford side has been built is Matty Hughes, and this season the captaincy has passed from Marsden to Hughes. In consecutive years Hughes has scored first-class centuries in the 4-day game (116 on both occasions), and last year he produced a sensational man-of-the match performance, scoring 75*(58) to effectively take the twenty20 game away from Cambridge.

Hughes, and opening batsman Dan Escott form the power-axis of the Oxford side, and have been key in the side translating their Lords dominance into success across the formats. In last year’s 4-day fixture, Escott scored 125 and claimed 6-71, a remarkable feat enlisting him into a cadre of elite performers to have scored a century, and taken a five-for on first-class debut. This week alone, he boasts 75, 4-44 against Cardiff Metropolitan and 76, 3-3 against Portsmouth University, both in 50 over games.

Retaining any of their crowns with just 5 of the side remaining would be a prestigious achievement, and offers yet more insight into the difficulty of stringing together a series of Varsity results. Indeed, Cambridge this year have the edge in terms of experience – 23 first-class appearances to Oxford’s 13 – and continuity, with 6 returning Blues aiming to avenge their defeats, plus the returning four-time Blue (2012-2015) Nipuna Senaratne. Senaratne started the season with the MCCU, and in defeat to Lancashire provided stout resistance; his 31(110) before being bowled by Jimmy Anderson the sole double-figure score registered in the innings. In particular, Senaratne facing Johnny Marsden is likely to be one of the key battles in the series. In FC cricket, he is yet to be dismissed by Marsden, scoring at a strike-rate of 29.76 (84 balls), but the Oxford fast bowler has claimed his wicket on one occasion, lbw at Lords.

The Cambridge side are under the stewardship of Patrick Tice, and the former Ireland U19 wicket-keeper can call upon the core of predecessor Jamie Abbott’s side. In a losing cause, fresher, and only first-class debutant in the Cambridge team, Angus Dalgleish was mightily impressive last season, with Varsity averages of 35.50 with the bat and 20.25 with the ball. The performance was typified at Lords, where he hit a stunning 77 from 70 balls, whilst wickets (eight of them) crumbled around him. Dalgleish batted at 3 that day, and effectively occupied the same position in the white heat of the Parks, crafting a debut 41 from a perilous 9-4.

He is certainly Cambridge’s danger man, and he will need to be supported well by opener Tom Colverd, and quick Rhuari Crichard, who has been in searing form this season, taking 17 wickets. No one has bowled more Varsity overs (109.4), or taken more Varsity wickets (17) than now-departed spinner Avish Patel across the past two seasons, and for the light blues there will certainly be an extra onus on attacking with the new ball. Interestingly though, Crichard has never dismissed Oxford captain Matty Hughes – who has scored 61 runs off the bowling, at a strike-rate of 70.93 across the three formats.

His opening bowling partner, Tim Moses, may well be the surprise package of the affair. A first-class bowling average of 67.00 is a disservice to the Cambridge fresher. Not least because that was achieved in an austere assessment of the Notts, Lancs and Middlesex opening partnerships back in April (and accounting for Alex Hales), but that it omits his awkwardness – generating pace and bounce from his tall frame. That in Lancashire’s opening first-class game of the season, Haseeb Hameed was hit on the left-hand by Moses, just 23 balls into his innings, and was forced to retire hurt, is telling.

In the 4-day fixture, the two sides will field at least ten first-class debutants between them. Ten took to the field for the 2009 renewal, but each side afforded five. This year, in Oxford’s case, six debutants on a single side will become the highest for either team for ten years, when in 2007 they similarly fielded six debutants at Fenners. Then, a draw ended a run of four consecutive thrashings in the incarnation pre-dating Varsity 2.0, and cricket’s modern revolution. Here, the dark Blues are chasing new history in with a side deprived of so many of its history-makers.

If Oxford are to overcome their transitory period, then history, it seems, is well poised to repeat itself. Both Matty Hughes (2015) and Dan Escott (2016) recorded centuries on their FC debuts for Oxford in the fixture, and another this year would, incredibly, match the hat-trick recorded between 2008 and 2010. As much as it is a cauldron of intensity, cooked up by rich heritage, Varsity is a stage for introduction too.